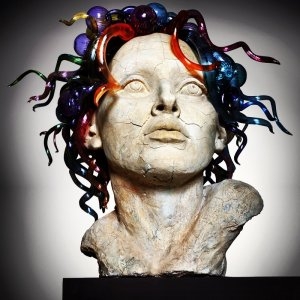 An American artist of Iranian stock, Angela Larian, has put her artworks on view at Shirin Art Gallery in New York.

A major characteristic common in her works is the artist’s use of Persian texts, at times transformed into fragment words, and geometrical forms, which often combine with scripts.

As Linda Komaroff, curator and head of the Art of the Middle East Department at the Los Angeles County Museum of Art, states in the exhibition catalogue: “Mysticism, spiritualism, minimalism, conceptualism, historicism, philosophical aphorisms, and a certain amount of self-referentialism, are all threaded throughout Angela Larian’s art. In combination, these help in creating something fresh that pulls the viewer between the realm of the seen and the unseen.”

“My works are a representation of an inner dialogue; each piece serves as a means, through which ideas are illustrated,” said the artist. In her exhibition, she tries to create a space for viewers that will allow them to reflect their internal emotion, moving behind the physical vision.

“My recent works focus on the paradigm of God and the divine within our modern culture. For this, I drew inspiration from the ancient Avestan, the language of Zoroastrian scripture, and the word ‘Khoda,’ which (in Persian) means not only God, but also literally the self (Khod), who has risen. It is this innate knowledge of the higher being within each of us that I have tried to instill in the art shown here.”

In an introduction to the exhibition, Larian said: “I draw inspiration from the philosophies of Plato and Nietzsche as well as the poetry of Rumi and Hafez. Where my art once represented my unconscious and veiled self, my personal development has led me to visualize my own perceptions of the collective human consciousness.”

She further noted that metaphor is the language of unconscious. “My art finds its language through metaphor, mysticism, poetry and philosophy.”

In her works Larian, 53, displays iconic visual language and multidimensional pieces, through various mediums including bronze, concrete, metal, video, neon and print objects. Her large bronze and iron sculptures are included in a number of private collections.

The exhibition will be on view at the gallery through March 1.